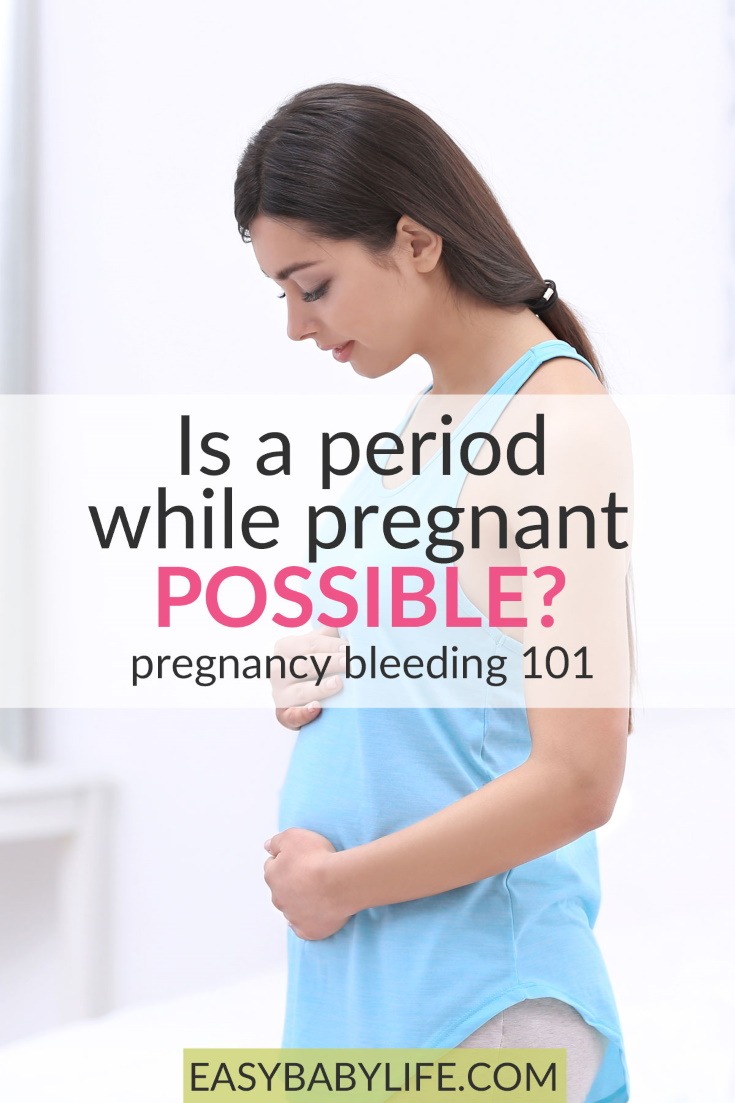 The fact that you can’t have your period while pregnant in week 35 or even 22, is something most people would know about and agree on.

But how about when 5 weeks pregnant? Or 8 weeks?

Unless your pregnancy was unintended and unwanted, bleeding in early pregnancy can be quite traumatic. Or at least very disappointing. It is also very easy to start making explanations for yourself why you are bleeding and still pregnant. (Yes, I have been there, done that. Many times.)

There are reasons why you could be bleeding in early pregnancy and still pregnant. In most cases, you’re not. But read about the special cases here, as well as a few reasons for bleeding in late pregnancy.

A Period While Pregnant?! The Real Reasons for Pregnancy Bleeding

Although many women think they can have a period while pregnant, this is not going to happen.

When you consider what a menstrual period is, you will realize this is not possible. A menstrual cycle starts when you do not become pregnant and flushes everything from the body that was being prepared in the event a pregnancy did occur.

6 Reasons for Bleeding During Early Pregnancy

If you are bleeding when you are in the first trimester (first three months) of your pregnancy, this is vaginal bleeding or bleeding inside your uterus, not a period while pregnant. It is not rare although you still should consult your doctor IF your pregnancy has already been confirmed by, for example, a pregnancy test.

Here are some common reasons for bleeding during early pregnancy.

Sometimes, bleeding in early pregnancy occurs only a few days after conception when the egg attaches to the wall of the uterus. This can be anywhere from 5 to 10 days after conceiving.

The bleeding may seem like an actual period, however, it is not. Instead, it is called an implantation bleeding and is just that; small bleeding as the egg is buried into the uterine wall. So this is actually a positive spotting, that occurs prior to the day when your period is due.

There are women who bleed regularly for the first two or three months after becoming pregnant. Because the bleeding occurs regularly, it is mistaken for a period.

What it actually is caused by is the hormonal changes your body is going through and is often called “early pregnancy bleeding“. This is not uncommon and is one of the reasons women think they are having a period.

Another possible cause of bleeding is that there may sometimes be a blood clot that will appear on the placenta along the outer edge. Called a subchorionic bleed, this is not rare and will normally clear up on its own.

This can cause bleeding that is similar to a period. You should let your physician know so they can keep track of the situation as a precaution.

4. Uterine Wall Bleeding due to Hormones

Yet another reason may be due to the hormones get a little wacky. They may cause parts of the uterine wall lining. Because it has not totally attached itself to the placenta, parts of it will be shed. Although this sounds serious, it is actually a common occurrence and should not be a concern.

If you get pregnant while on birth control pills, you could continue bleeding for several months. This is confusing because you are unable to pinpoint the exact date of your last period. The doctor will have to do an ultrasound to figure out when the baby is actually due.

Then, of course, bleeding in early pregnancy can also be what a newly pregnant woman is the most worried about – a miscarriage. To rule it out, or in the worst case at least have it confirmed, you really should go see your OB/Gyn in case of bleeding after a positive pregnancy test.

To learn more about getting pregnant after a miscarriage and read other moms’ experiences with this sad situation, click here.

3 Reasons for Bleeding During Late Pregnancy

There are several reasons you could bleed during the latter part of your pregnancy. Obviously this late in pregnancy no menstruation is involved.

Bleeding in late pregnancy can be a lot more serious than early bleeding and should be reported at once to your physician.

One of the reasons could be a placental abruption. This is when the placenta separates from the uterine wall. This does not occur often but is more prevalent among certain women.

If you have had a history of this, it is more apt to happen. Placental abruption is a very serious and life-threatening condition for both the mother and child, so call 911 if you start bleeding abundantly. 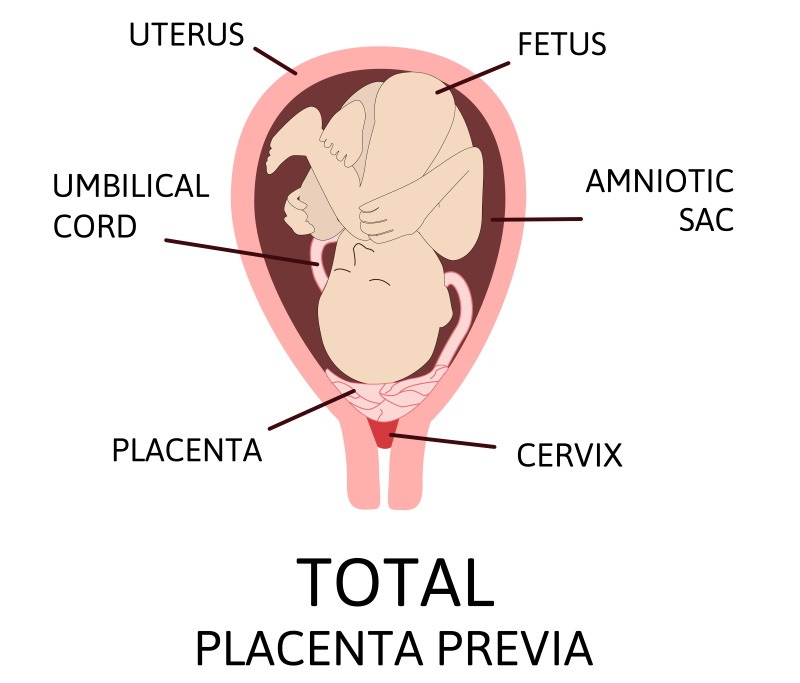 Another potentially very serious condition is called placenta previa. This happens when the placenta blocks the cervix. A common symptom of placenta previa is unpainful bleeding, often during the second trimester. It is diagnosed through an ultrasound scan.

The placenta may block the cervix totally, like in the picture above or partially. This happens in around 1 of 200 pregnancies (source), and if it doesn’t correct itself (which it quite often does), vaginal birth is impossible.

Also, placenta previa can result in mild or severe pregnancy bleeding and must be assessed by a doctor. You might be instructed to bedrest, or at least not to exercise – all to minimize the risk of bleeding and premature birth.

Women who have given birth by cesarean section or have had multiple uterine surgeries are more prone to this condition. Smoking, the use of cocaine, or being older than 35  years also increase the risk.

Early labor can cause bleeding as well. This should also be checked out immediately.

You might also want to read up on signs of labor as well as Braxton-Hick contractions, so you’ll know if there are other signs of early labor going on too.

Any time bleeding occurs when you are pregnant it is best to be on the safe side and inform your doctor. It is definitely not possible to have a period while pregnant, so communicating with your doctor is important! However, in many cases, everything is fine! This is important to remember too!

I truly hope you will not have to experience the stressful event of unexpected bleeding in pregnancy. If you do, at least make sure to find out why. It doesn’t have to be a worst-case scenario. A lot of times, it is not. 🙂

Good luck with your pregnancy and feel free to share any thoughts by leaving a comment below.